May 2011
I went back to the durian plantation recently in hoping to see the CHE juvenile but regrettably the access was still blocked! :(  According to the construction worker i spoke to it will take another month before vehicles are allowed to get thru, so i guess the juvenile CHE is going to miss me to death! 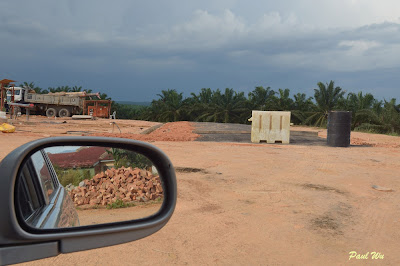 So i made a quick diversion to a nearby deserted lot for the bee-eater as I have seen and photographed them busy making nesting holes on the ground.  The 4 pairs seemed to live in harmony as their nesting holes are not too far apart,  I was rather puzzled by one particular pair though, they were still busy digging not one, but 4 holes, all within the same area. (see video at the bottom) 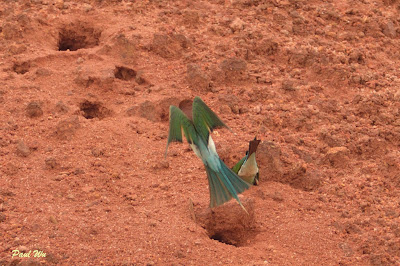 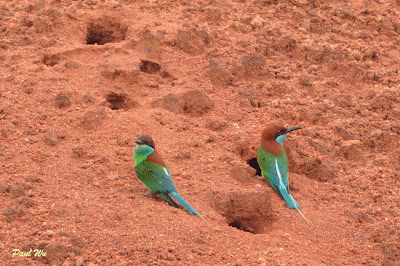 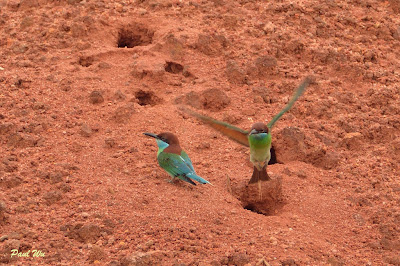 Generally Blue-throated Bee-eaters are actively moving while on perch and love to perch on tiny branches in the open space, so anything under 1/60s is risky. But luckily their perch are predictive, hence you will have all day to perfect your low iso shots with MLU once you found their feeding ground.
I took delivery of my new camera Nikon D5100 last week, and most of the shots here were taken with it + TC1.4 and 500mm F4 lens.  The focal length on the cropped sensor gave me a fright once again  as I am so used to the fullframe's focal length camera by now.


But the extra reach is certainly handy when it comes to nesting and shy species.  The three photos abv (D5100 with 300mm + TC2) were shot quite some dist. away on 50% cropped! 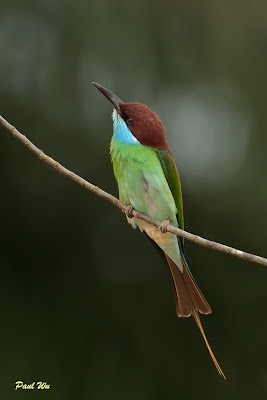 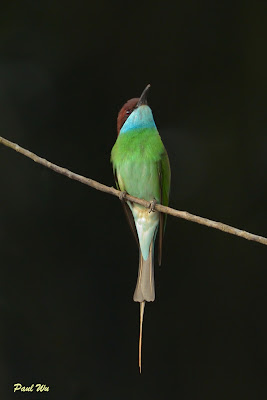 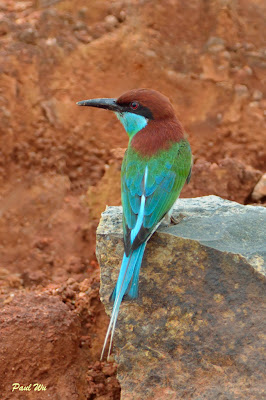 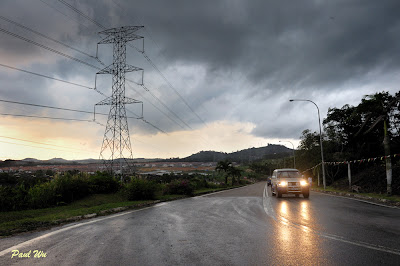 There is no bird in this pic, just thought it would look nice on
my blog as it was taken on location!
4th May 2011
Although the cropped sensor gives me a shocking extra 50% reach,  but I got even more greedy today by setting up hide 15' from their favorite perch, as you can see the perch was on higher ground so any nearer would be undesirable due to higher inclination angle that produces chin-up-looking shots l. 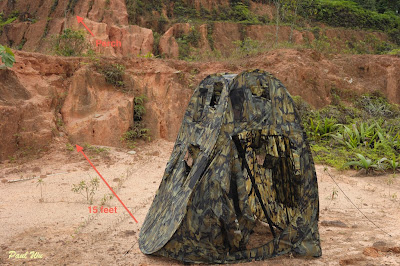 4 pegs and string come with the hide, and it is important to clamp
it down tightly as breezing wind will send tremor to your lens hence
killing your mlu shots.
Sitting in the hide under humid temperature is not something i really enjoy, half the time I was worried that a pit Viper or King Cobra would sneak in happily underneath to say hello, especially in Panti forest.
But the hide I got from Jason of Trifid-Optics.com is awesome, it has more windows than my terrace house for sure and honestly, just as spacious inside. There are more than 10 zipped openings on the four sides so as long as you are not taller and fatter than me you should feel comfortable to move around your setup and shoot at any angle and direction you want.
So lets take a tour inside.... 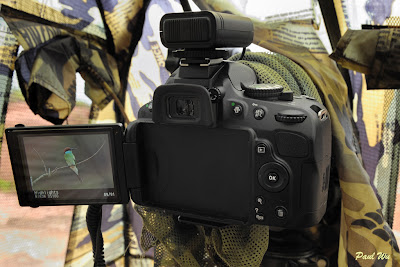 I sweat easily, but with a satisfying shot like this somehow helps to
slow down my perspiration and palpitation..... 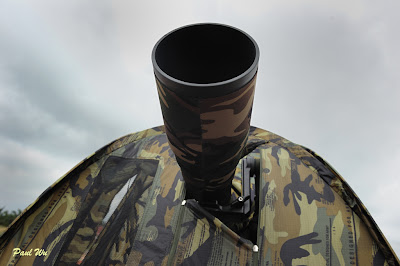 DON'T set up something like this in the desert of Libya now
even if you saw a big-foot hopping around!


And with the hide, you get shots like these easily, bird imgs in full frame without spooking them! Half the time I was giggling as the bird would stare at the lens with s strange look. 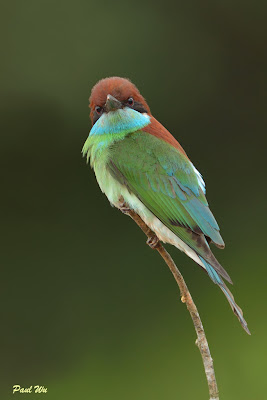 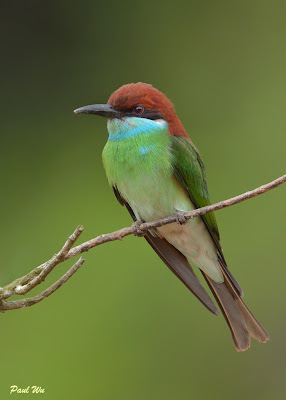 
Got bored today after work, and suddenly think of the BTBEs again! So i made a quick trip to the site hoping to see 4 of them on the same perch....... 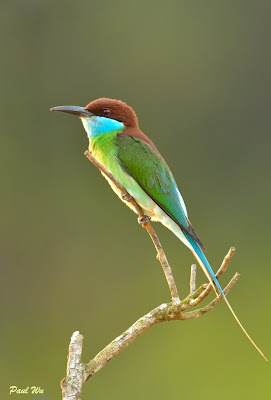 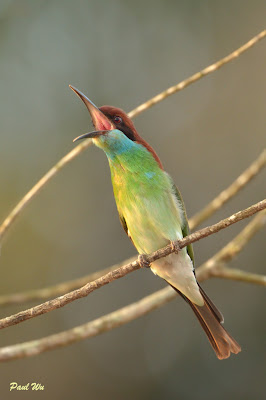 Three BTBEs came around 7pm, at ISO 8000 F6.3 speed was only 1/60s on D3s, low for this species as they are constantly moving eyeing for prey, and the wind was quite strong, so i guess i just have to come back again! Besides i need at least F16 to cover the DOF for the three as I am shooting from low angle! :( 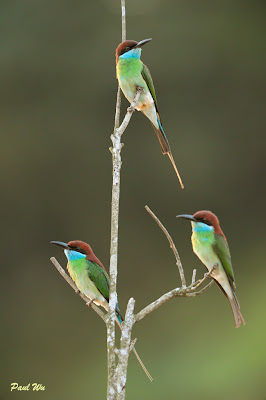 And below is an uncropped img taken with D5100 + TC1.4 500mmF4, shot from hide again ~17' away, there was another bird barely 10 inches away! But due to the narrow field of view and close distant it was out of the frame. 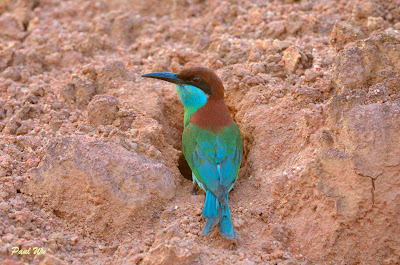 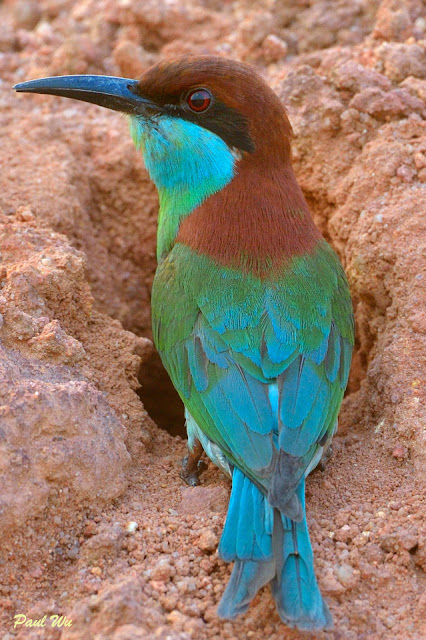 
By the time i reached the site, 7 BTBEs were already roosting on a tree for the day! A quick setup of my hide and got only two on a perch! Is that too much to ask for 4 on a perch? :(


So more is coming! 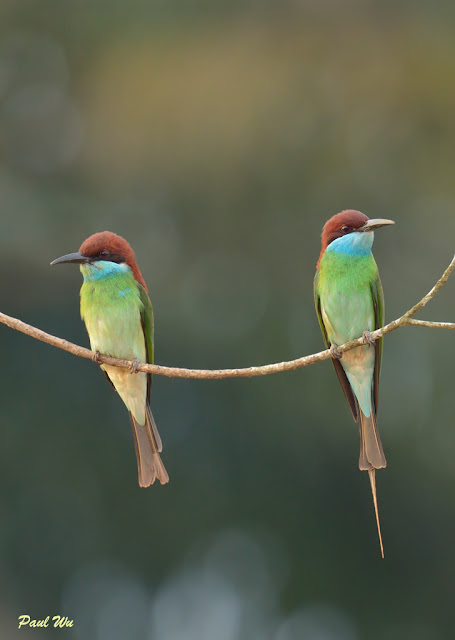 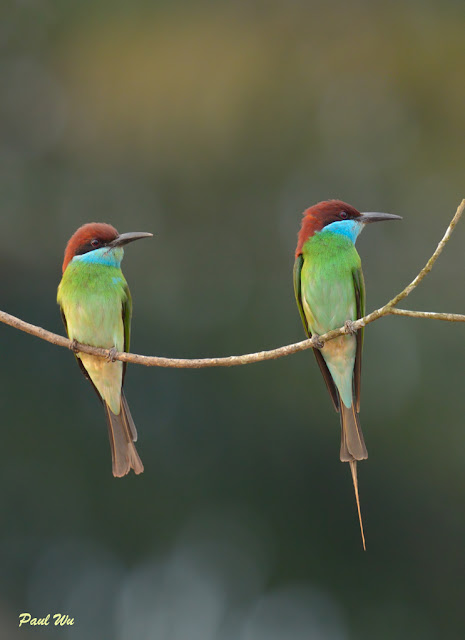 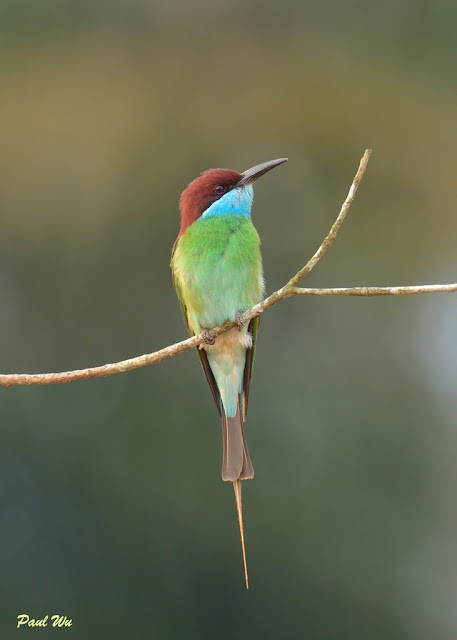 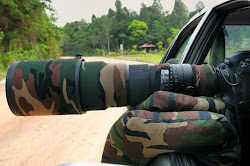 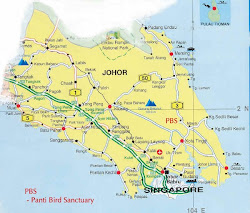 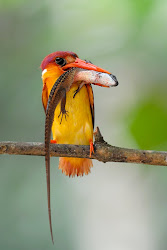